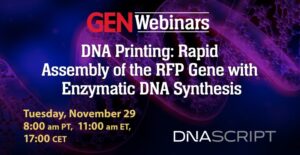 Rapid Assembly of the RFP Gene with Enzymatic DNA Synthesis

DNA assembly is commonly performed in the build step of the design-build-test-learn cycle at the core of synthetic biology. In many assembly workflows, DNA is assembled into gene fragments, which are then assembled into larger constructs, often plasmids. Most research labs often generate gene fragments by restriction digest or PCR of existing templates, and in cases where new templates are needed, order them from external commercial suppliers.

During this event, we will learn about results from a recent study where gene fragments were assembled by polymerase cycling assembly from DNA oligos made in the lab using the SYNTAX System and enzymatic DNA synthesis (EDS). The synthesized gene fragments were then used immediately in a DNA assembly workflow to create a plasmid containing a functioning RFP (red fluorescent protein) gene. The ability to print DNA oligos on demand for assembly significantly shortened the time from design to build.

In this GEN webinar, our distinguished speaker, Kym Delventhal, will highlight the steps to successfully build a gene fragment for RFP gene synthesis from EDS oligos. We will then introduce the broad set of capabilities of EDS and the SYNTAX System and review data from applications including PCR, qPCR, NGS, Sanger sequencing, gene assembly, CRISPR, smFISH, and more.

A live Q&A session will follow the presentations, offering you a chance to pose questions to our expert panelist.

We use cookies to analyze this site's traffic, enrich your experience and provide you with personalized advertising. Keep control over your data by setting cookies. You can change your mind at any time. Refusing cookies does not affect the operation of the site but may alter your experience. For more information see our cookie policy and our privacy policy. Do not sell my personal information
View cookie settingsContinue without acceptingAccept all and continue

This website uses cookies to improve your experience while you navigate through the website. Out of these cookies, the cookies that are categorized as necessary are stored on your browser as they are essential for the working of basic functionalities of the website. We also use third-party cookies that help us analyze and understand how you use this website. These cookies will be stored in your browser only with your consent. You also have the option to opt-out of these cookies. But opting out of some of these cookies may have an effect on your browsing experience.
Necessary Always Enabled
Necessary cookies are absolutely essential for the website to function properly. These cookies ensure basic functionalities and security features of the website, anonymously.
Others
Other uncategorized cookies are those that are being analyzed and have not been classified into a category as yet.
Advertisement
Advertisement cookies are used to provide visitors with relevant ads and marketing campaigns. These cookies track visitors across websites and collect information to provide customized ads.
Analytics
Analytical cookies are used to understand how visitors interact with the website. These cookies help provide information on metrics the number of visitors, bounce rate, traffic source, etc.
Functional
Functional cookies help to perform certain functionalities like sharing the content of the website on social media platforms, collect feedbacks, and other third-party features.